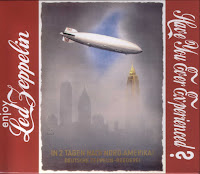 9/19/1970 (afternoon) New York, NY
Have You Ever Experienced?
Immigrant Song, Heartbreaker, Dazed and Confused, Bring it on Home, That's the Way, Bron-Yr-Aur, Since I've Been Loving You, Thank You, What is and What Should Never Be, Moby Dick, Whole Lotta Love, Communication Breakdown
Led Zeppelin's first appearance at Madison Square Garden begins with a simple "good afternoon" from Plant. The tape shifts between sources a bit during Heartbreaker, finally settling in and clearing up for Page's excellent a cappella solo. Page plays a variety of bluesy licks during the initial verses in Dazed and Confused. A vendor selling binoculars passes near the taper during the bow solo, which Page ends with an explosion of wah-wah.
The taper fiddles with the microphone a bit during another beautiful That's the Way. Plant asks the crowd if they remember the band's shows at Central Park and Carnegie Hall before Bron-Yr-Aur. Page takes a laid-back approach during another great Since I've Been Loving You. The tape gets a bit warbly at the end of Thank You. Plant expresses the band's sorrow over Jimi Hendrix's death the day prior before What is and What Should Never Be.
Plant once again attempts to prevent a confrontation between the crowd and the authorities before Whole Lotta Love. Page lets the theramin go wild during the Everybody Needs Somebody to Love section. The medley includes John Lee Hooker's Bottle Up and Go, For What it's Worth, and Muddy Waters's Honey Bee after a funky interlude. The show end with Communication Breakdown, which features a brief reference to American Woman during the breakdown. As the rest of the band finishes the song, Page keeps playing and brings them back around for another funky breakdown before letting the song end. A taste of things to come later that evening.
The tape is a combination of at least two sources. The primary source is very clear with Page front and center. The filler and end of the show source is a bit hissy and distant, but still highly enjoyable.
Click here for audio samples courtesy of Black Beauty.