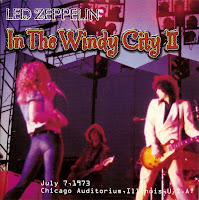 7/7/1973 Chicago, IL  In the Windy City II
Rock and Roll, Celebration Day, Over the Hills and Far Away, Misty Mountain Hop, Since I've Been Loving You, No Quarter, The Song Remains the Same, The Rain Song, Dazed and Confused, Stairway to Heaven, Moby Dick, Heartbreaker, Whole Lotta Love, Communication Breakdown
Plant's voice is still a bit rough as Rock and Roll gets moving. The tape is cut during the third verse of Celebration Day due to the taper accidentally pushing the pause button on his recorder. Fortunately, he realizes his mistake fairly quickly and we return as Plant greets the crowd following the absent Black Dog. Plant asks if anyone was at last night's show, saying "it was a little bit too vicious, as Lou Reed would say." Page blazes through the guitar solo during Over the Hills and Far Away. Since I've Been Loving You is dramatic and powerful, despite Plant's injured voice.
Following No Quarter, Plant announces "we'd like to make it familiar to the press, we read a review of last night's concert and after six years, they still think that John Bonham plays the organ." There are some distracting tape issues near the end of The Song Remains the Same. Page is on fire during the guitar solo/workout section in Dazed and Confused, his fingers flying across the fretboard as Bonzo and Jones explore a heavy groove. Bonzo explodes like a barrage of cannon fire during the crushing return to the main riff. Page solos wildly over Plant's chants of "take it easy" during the outro. There is a slight cut during the middle section of Stairway to Heaven. As the song ends, Plant tells the crowd "at this point, I'd like to give you a little round of applause."
As Plant repeatedly calls out Bonzo's name after Moby Dick, someone near the taper answers with shouts of "who?" and "once more" following each iteration. Page shreds through the fast guitar solo during Heartbreaker as Bonzo and Jones hold down a funky rhythm. Unfortunately, there are major tape issues during the initial verses of Whole Lotta Love. The riotous Boogie Chillen' section features an excellent guitar solo from Page. The taper and his friends provide some amusing commentary before the band returns to the stage to close the show with a fantastic Communication Breakdown.
The tape is clear, but suffers from minor tape issues throughout.
Click here for an audio sample courtesy of Black Beauty.

Rather a pity about the tape issues because it's a pretty good recording. Plants voice is marginally better than the previous night and the rest of the band are in pretty solid form. I've always been rather fond of this show.