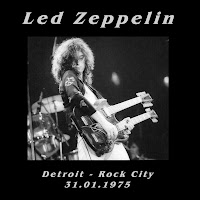 1/31/1975 Detroit, MI  Detroit Rock City
Rock and Roll, Sick Again, Over the Hills and Far Away, In My Time of Dying, The Song Remains the Same, The Rain Song, Kashmir, No Quarter, Trampled Underfoot, Moby Dick, Stairway to Heaven, How Many More Times, Black Dog
Plant continues to have trouble with his voice, struggling to retain some sense of melody during the opening numbers. Page begins to warm up during the guitar solo at the end of Sick Again. As the song ends, Plant tells the crowd "it's our great pleasure to be just about back." Page and Jones lose each other for a moment at the end of the guitar solo during Over the Hills and Far Away. In My Time of Dying is introduced as "what you might call... traditional." Page's fingers fly across the fretboard during The Song Remains the Same. No Quarter is absolutely fantastic. The instrumental section is an epic journey.
Bonzo is introduced as "the man who made Led Zeppelin a legend" before Moby Dick. While introducing what will prove to be the final appearance of How Many More Times, Plant tells the crowd "we decided about a week ago that we should start doin' this again, cause we haven't done it for about six years... it's called jerkin' off." The band seems lost in the arrangement, unsure about what comes next. Unfortunately, the song is cut just before the final "gun!" Page's fingers become hopelessly entangled in the strings during the show-closing Black Dog.
The tape is clear and well-balanced, if a bit noisy at times.