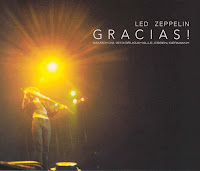 3/22/1973 Essen, Germany Gracias!
Rock and Roll, Over the Hills and Far Away, Black Dog, Misty Mountain Hop, Since I've Been Loving You, Dancing Days, Bron-Y-Aur Stomp, The Song Remains the Same, The Rain Song, Dazed and Confused, Stairway to Heaven, Whole Lotta Love, Heartbreaker
Following Over the Hills and Far Away, Plant announces "we must ask you to cool everything for about three minutes cause James's guitar is a bit fucked." He jokes with the crowd during the break, telling them "we're very happy to be back again... for one year, Zeppelin doesn't work too hard, but this year we work hard all the time... because we have no money." Since I've Been Loving You finds the band at its most efficient. Their playing is wonderfully restrained, yet intensely powerful. A fantastic performance. The Song Remains the Same is quite fragmentary. The Rain Song is beautiful. Bonzo is like an out of control locomotive during the frantic lead-in to the bow solo in Dazed and Confused. The guitar solo/workout section begins with a barrage of machine gun snare blasts. Bonzo thrashes wildly at anything within reach during the funky breakdown prior to the call and response section. The Mars, the Bringer of War section features an devastatingly heavy stop-start rhythm. Yet another amazing performance.
The band plays a tongue-in-cheek Big Spender interlude prior to Whole Lotta Love. The theramin freakout is followed by a frantic rhumba. Plant gets ahead of the band during the Everybody Needs Somebody to Love section, which includes a bit of Turn on Your Love Light before ending in a high-speed cacophonous explosion. The medley includes Boogie Chillen', Elvis Presley's (You're So Square) Baby I Don't Care and Let's Have a Party, I Can't Quit You Baby, and The Lemon Song. Following a long pause, the band plays a bit of Move It before closing the show with Heartbreaker. As the band leaves the stage, Plant says "thank you very much Essen, you've been very nice... see you again, three years!"
The tape is a combination of two sources. The audience recording is fairly clear, if a bit muffled at times. The soundboard recording, which includes most of Dazed and Confused and Whole Lotta Love, is excellent.
Click here for audio samples courtesy of Black Beauty.

Listened to the aud yesterday.
Dazed has to be one of THE greatest ever versions, all the band in total unison with Page at his most fluent. Wonderful!

I am listening to "Essential Led" Listen to Track 2 ("DAZED") from 13:59-14:04. Page and Bonham are totally and completely ON! There are too many que stops, but who cares. Europe 73 is/was/always will be a PEAK era!

I'm surprised this isn't a must hear. Every song is powerful and precise. Bonzo's drumming is again amazing especially at the end of Dazed And Confused and Whole Lotta Love. I wonder why he was this great in Europe of '73. It's kind of strange how the soundboard picks up part way through Dazed and concludes after Whole Lotta Love just like it did with the the Hamburg concert.