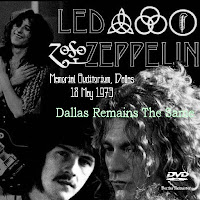 5/18/1973 Dallas, TX  Bertha Remaster
Rock and Roll, Celebration Day, Black Dog, Over the Hills and Far Away, Misty Mountain Hop, Since I've Been Loving You, No Quarter, The Song Remains the Same, The Rain Song, Dazed and Confused, Stairway to Heaven
The show starts off a bit sluggish with a slow, plodding Rock and Roll. Plant calls out "gimme some monitors, Rusty" during the second verse of Celebration Day. Page's fingers get stuck in the strings during the guitar solo. Following Black Dog, Plant apologizes for the show's late start, explaining "John Paul Jones has got two fractured ribs and he's still managing to stand" adding "that's not really funny at all... we thought he got the clap." He tells the crowd "I can feel it gettin' better" after a mellow Since I've Been Loving You.
There is a slight cut in the tape during the final verse of The Rain Song. As the song ends, Plant announces "John Paul Jones played the orchestra" joking "that wasn't Woody Herman folks, it was John Paul Jones." Dazed and Confused is a somewhat lackluster affair. The song gets off to a lazy start during the initial verses. Page's fingers get stuck in the strings during the guitar solo/workout section, which comes off as a bit hurried and uninspired. The recording ends abruptly as Plant is talking to the crowd about "improvement" following Stairway to Heaven.
The tape is an excellent soundboard recording.

wow, crappy review, this show was great, the soundboard doesnt capture anything over 8k, the audience source is much nicer, but it seems the hoarders have struck again

sorry, to correct myself, "a" crappy review, as in you didnt like it, not to insult

The team’s project management is exceptional, with minimal turnover or issues that affect clients. IT Services