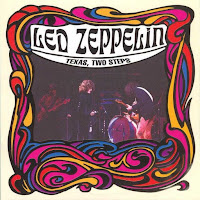 3/29/1970 Houston, TX  Texas Two Steps
White Summer/Black Mountain Side, How Many More Times
Only a short fragment of the show, the tape begins as Plant is introducing White Summer/Black Mountain Side. The sound is similar to that of the previous night's tape, but a bit clearer and with less hiss. How Many More Times begins with a For What it's Worth jam while Plant introduces the band. The crowd is once again introduced as the fifth member. There are some tape disturbances as well as a cut during the medley, which includes the return of the For What it's Worth theme. The tape ends quite abruptly as the band is jamming on a bluesy riff.
Click here for audio samples courtesy of Black Beauty.

HMMT is a must hear to me. Lots of creative improvs in it. I wish more of this show were available.