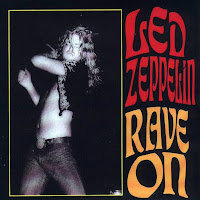 11/24/1971 Manchester, England  Rave On
Immigrant Song, Heartbreaker, Black Dog, Since I've Been Loving You, Celebration Day, Stairway to Heaven, Going to California, That's the Way, Tangerine, Bron-Y-Aur Stomp, Dazed and Confused, What is and What Should Never Be, Rock and Roll, Whole Lotta Love, Thank You
The tape begins with an apology from Plant for a delay due to icy roads. Plant is in top form, his voice soars over the crowd in a sea of echo during Black Dog. Bonzo pounds through Since I've Been Loving You with incredible force. Plant unleashes some truly blood-curdling wails toward the end of the song. Page plays a bit of Black Country Woman before Going to California. The tape is cut toward the end of That's the Way, leaving us at the beginning of Tangerine.
The guitar solo/workout section during Dazed and Confused is amazing. After blazing through the solo, Page gets the band into a funky jam. The Crunge turns into an excellent jam on Theme from Shaft. There is a slight cut during the explosive return to the main riff. Page solos wildly during the outro, punctuated by Plant's echo-drenched grunts and moans. Plant's voice is incredibly powerful during Rock and Roll. The theramin freakout during Whole Lotta Love features a great heavy jam. The medley begins with a funky improvisation before Boogie Chillen' and a riotous rendition of Rave On!. A cut at the beginning of Hello Mary Lou leaves us at the return to the main riff. The recording ends with the first two minutes of Thank You.
The tape is quite muffled and distorted.
Click here for an audio sample courtesy of Black Beauty.

HA! HA HA HA! Theme From Shaft? If Robert includes the lyrics then my life will be complete.

Just imagine the golden god singing about the black private dick that's a sex machine to all the chicks.

Please tell me they go the tongue in cheek route and sing the words.

Robert's voice is in near top shape in this show. In my opinion, it's the best he's sounded since the Montreux show in August, and he'll never sounds this good again. Enjoy.

For the excellent company Begin with the internet site, the customer service over the cell phone, to the detailed care they deliver in your presence Best Auto Body Shop in St. Louis