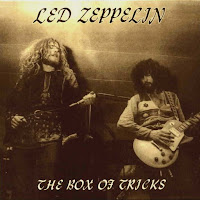 9/6/1970 Honolulu, HI  The Box of Tricks
Immigrant Song, Dazed and Confused, Heartbreaker, Since I've Been Loving You, What is and What Should Never Be, Moby Dick, Whole Lotta Love, Communication Breakdown
An abbreviated set, the tape begins with a brief introduction before the band launches into a powerful Immigrant Song. Plant's wails threaten to overpower the rest of the band. The familiar transition to Heartbreaker is missing, instead Jones dives directly into the intro to Dazed and Confused. Page's fingers are a bit sticky as he battles Plant during the guitar solo. His guitar sounds like razor blades as he solos during the outro. Heartbreaker begins with an extended a cappella intro. Page's angry guitar tone slices through the solos.
Plant jokes that the band has been renamed "the box of tricks" before a powerful Since I've Been Loving You. He encourages the crowd to get loose and move before Whole Lotta Love. The medley includes Stop Messin' Round, I'm Movin' On, Elmore James's Shake Your Money Maker, and another raucous rendition of Some Other Guy. Page plays a funky intro before Communication Breakdown as Plant tells the crowd to "groove!" Plant makes a quick reference to American Woman during the breakdown. The crowd is left begging for more as the announcer tells them "that's all, goodnight."
The tape is clear and well-balanced, but a bit noisy.
About five minutes worth of 8mm color footage from the show exists. The film is fairly dark and consists primarily of quick-cut shots of Plant gyrating and tossing his hair.
Click here for a video sample courtesy of Black Beauty.

A real stunning show and a v good audience tape. Obviously great to be in Honolulu. Maybe number 2 of the tour behind New York.