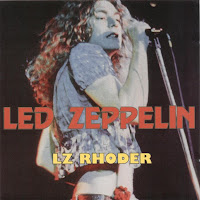 7/21/1973 Providence, RI LZ Rhoder
Rock and Roll, Celebration Day, Black Dog, Over the Hills and Far Away, Misty Mountain Hop, Since I've Been Loving You, No Quarter, The Song Remains the Same, The Rain Song, Dazed and Confused, Stairway to Heaven, Moby Dick, Heartbreaker, Whole Lotta Love, The Ocean
The tape begins with a brief soundcheck before Rock and Roll crashes into motion. Page and Jones lose track of each other during the guitar solo. Plant is in good voice, belting out each line of Black Dog with power and bravado. As the song ends, he greets the crowd, saying "I was gonna say it's nice to be back, but I don't think we've been here before... I could be wrong." Page blazes through the the guitar solo during Over the Hills and Far Away. He cuts the final verse short, leaving Plant to moan "oh, you really oughta know" during the outro. As the song ends, Plant goes on a long tirade insisting that the crowd be cool and move back or the show cannot continue.
Since I've Been Loving You is incredibly powerful. Page's fingers race across the fretboard in a furious barrage of notes during the intro. The band plays as one entity, rising and falling in unison with every ebb and flow. A fantastic performance, one of the best in recent memory. Before No Quarter, Plant tells the crowd he didn't want to offend anyone with his earlier rant, saying "just to prove it, here's something that we really like to play and we're gonna play really fantastically." The instrumental section is simply outstanding, Jones's haunting melodies slowly build tension until Page's wildly passionate guitar solo explodes across the soundscape. The song has quickly become a major highlight of the show.
Plant finds something on the stage while introducing The Song Remains the Same, joking "I think I'll have to give this to one of the security men." A cut in the tape leaves us near the end of the song. There is another brief cut during the second verse of The Rain Song. Dazed and Confused is introduced as "something that's as old as the hills." The frenzied lead-in to the bow solo gives way to an elegantly heavy San Francisco interlude. Page is absolutely on fire during the guitar solo/workout section, racing frantically through a violent cascade of notes as Bonzo and Jones follow close behind. Unfortunately, the tape is cut just before the call and response with Plant, leaving us at the explosive return to the main riff. Page solos wildly over Bonzo's syncopated heartbeat rhythm during the outro. Another devastating performance.
Stairway to Heaven features an excellent, dynamic guitar solo from Page. Plant belts out the final verse with incredible intensity. Moby Dick is introduced as "somethin' to get off on." The pattern of excellence continues with a blistering Heartbreaker. Page, Jones, and Bonzo get into a high-speed funky jam following the initial verses of Whole Lotta Love. Unfortunately, there is a cut in the tape during the theramin freakout which leaves us near the end of the Boogie Chillen' section. The band closes the show with a terrific The Ocean, one of the best thus far. A truly incredible performance. Must hear.
The tape is clear and well-balanced, if a bit noisy on the high end.

A mind melter of a show, even the balls up in R&R and the missing last verse in Over the hills(due to crowd problems?) cant detract from a powerhouse performance.since ive been, No quarter, dazed, stairway & heartbreaker are amongst my faves ever.

When Plant refers to the "number" he found on stage, he was referring to a joint someone had thrown up to him.
This is an incredible performance, marred only by the mellotron being out of tune during the Rain Song, and Jones making rare mistakes in Rock and Roll and the intro to Dazed and Confused. All four members are on fire otherwise, as good as this tour ever got.
The taper moves to a different location halfway through the show, resulting in a better recording for the second half.

This is, perhaps, the best show of '73. Plant sounds great here, the best that I've heard him on this tour and the band is on fire. This should have been the soundtrack to TSRTS!

I attended this concert when in the Navy and homeported in Newport.
We were tripping on acid and smoking hash...
What a great show!

Performance-wise, this is one of the best shows Led Zeppelin ever put on. After 3 years of tinkering with the MSG shows to produce one show, this performance is still head and shoulders better. But the recording...until recently, the recording was bloody awful. Not even EV's "There's So Much More To Hear" was listenable. Now in 2015 Winston or someone has taken this show and painstakingly, track by track, eliminated all the muddy 1973 tape noise, added a clear mid and high end, somehow even stifling the distortion artifact due to whoever recorded the show having set the levels too high, added speed correction to The Rain Song and Stairway To Heaven, and finally, patched the tape cuts professionally. Why couldn't EV have done all this? Result - this show can now take its rightful place alongside the other one or two "best ever" performances, and it is easily the best single Led Zeppelin concert from the 1973 U.S. tour.

Hello. Where's the 2015 release? I don't see the full show on Black Beauty. Thanks.

I was at the 7/21/73 concert in Providence, and yes it was spectacular. I was absolutely right in the front row. I was face to face with the security guards they had at the front of the stage. I saw the "number" get thrown, picked up by Jimmy and thrown at the guard I was face to face with. It hit him in the back of the head but he never knew it. I am looking for photos/video of this show as I am sure I would be seen in that front row. Best show I've ever seen.