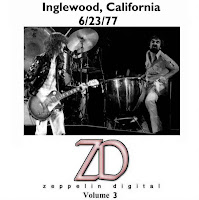 I was lucky enough to be there that night. 16 years old. They were smiling and giggling at each other all night. Moony took it over the top when he just appeared from stage left pounding on Bonzo's tympani. Plant sitting behind Bonzo's kit for a few minutes was an alien site and sound but memorable to say the least. The show was the complete definition of Loose but Tight. Yes, the middle part of Kashmir was a total train wreck but Plant amazingly brought the band back to 1. I found the bootleg of the show a few months later. Still have it.

My one and only time to see Zep. Had tix to Long Beach in 75 - Couldn't go. Had tix to the Rose Bowl in 76. Plant had his accident. Nothing was going to stop me from getting to The Forum that night! $8.50 ticket price. 3+ hours of An Evening with Led Zeppelin.