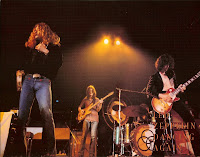 6/19/1972 Seattle, WA Dancing Again
Immigrant Song, Heartbreaker, Black Dog, The Ocean, Since I've Been Loving You, Stairway to Heaven, Going to California, Black Country Woman, That's the Way, Tangerine, Bron-Y-Aur Stomp, Dazed and Confused, What is and What Should Never Be, Dancing Days, Moby Dick, Whole Lotta Love, Rock and Roll, Louie Louie, Let's Dance, Thank You, Money, Over the Hills and Far Away, Dancing Days
The tape begins during the final verse of Immigrant Song. A thunderous Black Dog is followed by the first appearance of The Ocean. Bonzo pummels his drums during an urgent Since I've Been Loving You. Someone near the taper exclaims "oh wow, oh wow!" as the song ends. Page blazes through the guitar solo during Stairway to Heaven, repeating licks to mesmerizing effect. The very beginning of Going to California is cut. There is quite a bit of chatter going on around the taper, destroying the delicate atmosphere.
Following a cue from Plant, the rest of the band joins in for the first complete performance of Black Country Woman. Someone near the taper inquires about his tape recorder after That's the Way, taking time to say "hi" into the microphone. There is a cut near the beginning of Tangerine due to a tape flip. Bron-Y-Aur Stomp transforms the crowd into a foot-stomping hoedown. Plant comments on the previous night's show and the trouble in Vancouver before Dazed and Confused, the opening notes of which cause someone near the taper to yelp and howl with excitement. The lead-in to the bow solo features some excellent interplay between Page, Jones, and Bonzo. Page solos wildly during the outro, which Bonzo and Jones turn into a menacing imperial march. Unfortunately, the tape is cut during the frenzied race to the finish.
What is and What Should Never Be is followed by the first appearance of Dancing Days. Still unsure of the changes, the band gets a bit mixed up a few times. Plant mentions Bonzo's efforts to lose weight this tour, introducing him as "John Bonham, at the beginning of this tour, two hundred and ten pounds... right now he's at a hundred and seventy-five pounds!" before Moby Dick. During the drum solo, the taper says "I hate drum solos, I hate them... hate 'em a lot" directly into his microphone. There is a cut about fourteen minutes in. The theramin freakout during Whole Lotta Love is a cacophonous explosion. The medley begins with a new slow arrangement of Boogie Chillen' before the familiar fast riff kicks off a marathon of classics including Elvis Presley's Let's Have a Party, Hello Mary Lou, an out of tune rendition of Only the Lonely, Heartbreak Hotel, and Goin' Down Slow, which is cut during the "please write mama..." verse, leaving us at the end of the finale.
Plant introduces Rock and Roll as "an old one." Jones's organ solo includes hints of Everyday People before the rest of the band joins in for an excellent rendition of Louie Louie followed by Let's Dance. Page tears through a great guitar solo during Thank You. The crowd goes absolutely wild as the band returns to the stage for a riotous rendition of Money, which is unfortunately cut after two and a half minutes. After the cut, we're left in the middle of the first appearance of Over the Hills and Far Away. If all of this wasn't enough to push the crowd over the edge, the recording ends with the second performance of Dancing Days of the night, with Plant joking "this is one that you might have heard about two hours ago." A marathon performance of epic proportions. Must hear.
The tape is fairly clear, if somewhat noisy and overloaded.
Click here for an audio sample courtesy of Black Beauty.

Alleged 4.5 hour Boston Tea Party concert aside, this is the best Zep concert ever. I would shit my pants if a sbd of this came out. The highlight is the amazing "organ solo".

I love the guy at the end. He sounds like he saw Jesus or something (that's the best concert I've ever been too...).

This is a great show from the last period in time where Plant's voice was still awesome. Start to finish, this is definitely one of the best of '72 and of all time

Wow What a Great show.The Fact is I only downloaded it was because it was on the day I was born.Boy was I surprised Love It.

I can't belive that you said "the tape is fairly clear, if a bit distant and overloaded at times". Man, damn good show, but this recording is TERRIBLE. I only wouldn't rate it like an Must Hear due this very irritating listening experience.
On performance terms, this concert is epic. On setlist, fabulous. But this recording honestly SUCKS. Sorry.

Listening to this right now, Dazed and Confused is crazy, I actually backed it up to listen to the jams again. I still have a bit more to go. The band takes a few songs to warm up, but by "Since I've Been Loving You" they know that they are in for a LONG night. Yes the recording itsef may leave allot to be desired, but the performance has to be heard to be believed. The JEMS version of the tape is the one to get.

Even the experts have written this one off. Performance and setlist-wise, perhaps the best concert Zeppelin ever put on. Recording-wise...unlistenable. How in the name of all that is holy can this be deemed a "Must Hear"? The recordings, plural, are nothing short of garbage. I have well over 100 Zeppelin boots, many of which I obtained after consulting this blog. Many, also, required numerous versions in order to get something worth keeping. There isn't one for this show. I have found all of them out there, folks, and deleted or threw away every one. It saddens me that this epic show was captured so incredibly bloody awful. Given what Jimmy did with LA and Long Beach for HTWWW, I am forced to believe that no soundboard exists for Seattle. Do yourselves a big favor...seek out LA's Burn Like A Candle boot with the audio extracted from the same-titled DVD. It is out there to be found, is just an incredible performance as well, and sounds fabulous! This one, though, is nothing short of unlistenable rubbish, and a most definite "Must Not Hear".

@James, you said it yourself in the second sentence of your post. One of the best ever. A subpar recording doesn't take that away.

Well said, FRX, I will most definitely give you that. A great many people feel that this Seattle concert is the best show Zep ever did. But the LA show six days later is very, very close to this setlist, the band is on fire that night as well, and it is thankfully a very nice audience recording. The older I get, I just cannot force myself to listen to an awful recording no matter how great the performance anymore. There is just too much good stuff out there. My only real complaint about HTWWW is how much of the atmosphere Jimmy cut in order to merge the two soundboards. I actually prefer Burn Like A Candle to the official HTWWW, and that is the best praise one can give to a boot. As short as it was, this 1972 tour, to me, is the best concert tour for Led Zeppelin of all time. And I am so pleased to see that you are well and paying attention to this vital Led Zeppelin internet resource! I lastly also note that the wonderful Black Beauty site, that goes so hand-in-hand with The Year Of Led Zeppelin, is over the awful server woes that took it down and is even being updated regularly once again.

I'll stand up for the recording. It is actually not that bad depending on the version of the show you have and how you listen to it. The better the sound system, the better it will sound. Once you get into it, you can hear every instrument and really "enjoy" the recording for what it is, which is really like being among a wild audience and being stunned by the show.

Who said this is a bad sounding Recording??? You should listen to
Empress Valley's DANCING AGAIN and try to use a good Soundsysthem....

One of Zep's best concerts ever. I honestly don't find this recording unlistenable at all and agree whole heartedly with this being a must hear. I think this is the only time Zep ever out of the blue introduced so much new material in the middle of a tour, clearly they were feeling it for this show.

By the way, the girl who goes "Oh wow, wow" after SIBLY, i'm pretty sure she is doing that in response to the doublenecked guitar being brought on stage. She does it right before Stairway which is the first song of the night to use that guitar and almost immediately after she says that the taper makes mention of the doubleneck. Zep didn't play Seattle in 1971, so for these fans it is probably their first sight of that instrument and it seems to have left an impression!