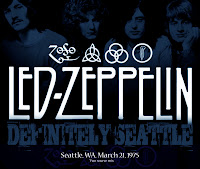 3/21/1975 Seattle, WA  Definitely Seattle
Rock and Roll, Sick Again, Over the Hills and Far Away, In My Time of Dying, The Song Remains the Same, The Rain Song, Kashmir, No Quarter, Since I've Been Loving You, Trampled Underfoot, Moby Dick, Dazed and Confused, Stairway to Heaven, Whole Lotta Love, Black Dog, Communication Breakdown, Heartbreaker
The tape begins with a stage announcement asking the crowd not to light any matches during the show or the house lights will be brought up, ruining the light show. The crowd erupts as Rock and Roll crashes into motion. Following Sick Again, Plant announces "well, we went across the border, it was alright, but it's much better back here." Page blazes through an excellent guitar solo during Over the Hills and Far Away. As the song ends, Plant tells the crowd "there's one demand that I'd like to make apart from that you enjoy what we're doin', and that is that you don't sway around too much at the front because somebody might get hurt." In My Time of Dying is an intense sonic assault. Jones's fingers dance across the fretboard as Page tears through the frantic guitar solos during The Song Remains the Same. The Rain Song is excellent.
Page plays a bit of White Summer as Plant dedicates a powerful Kashmir to "everybody who we met in Seattle this time who's been a groove and a gas." No Quarter is introduced as "a journey with more somber intonations." Jones delivers a highly dramatic piano solo which includes hints of Georgia on My Mind. The instrumental section features an epic guitar solo from Page. Jones's playing becomes a bit erratic toward the end. Page solos wildly during the outro. An outstanding performance, one of the best thus far. As the song ends, Plant announces "there's one song that we've done twice in... I suppose since we got ripped off for all that bread in New York ages ago, and because we really dig playin' here, for no other reason we're gonna do it again now" before the second rare appearance of Since I've Been Loving You in 1975. Page blazes through a blistering guitar solo. A fantastic performance. Trampled Underfoot features an aggressive guitar solo from Page. Plant repeatedly exclaims "see saw, knock on my door, gonna swing!" As the song ends, he says "with just a little bit of Gallows Pole thrown in."
Following a marathon Moby Dick, Plant tells the crowd "there's a little bit of a discrepancy about a guitar and a man who's being held by the police and all sorts of things, quite a story going on behind the scenes" before dedicating Dazed and Confused to "the innocent party" and "the difference and the balances between law and order." Page shreds wildly during the lead-in to the bow solo. The Woodstock interlude has been transformed into an amazingly haunting rendition of For What it's Worth. The instrumental machinery is in full swing during the frenzied guitar solo/workout section. Page is absolutely on fire, soloing furiously as Bonzo and Jones hammer along at a frantic pace. The epic journey reaches its peak during the wildly cacophonous outro jam. An utterly devastating performance, one of the best thus far. And at forty minutes in length, one of the longest as well.
Page hints at Louie Louie as Plant offers the crowd a history lesson on famous Seattle musicians before dedicating Stairway to Heaven to "the amount of work that Jimi Hendrix gave... and the amount of inspiration that he gave everybody in the business." Page slowly builds tension before erupting in a furious cascade of notes during the dynamic guitar solo. The final verse is explosive. Whole Lotta Love includes another excellent rendition of The Crunge prior to the funky theramin freakout, which is punctuated by a devastatingly heavy finale. Plant's banshee wails threaten to destroy the taper's equipment during a blistering Black Dog. There are a few slight cuts during the latter half of the song. A quick and dirty Communication Breakdown is linked nonstop with Heartbreaker. Page blazes through the guitar solos. As the band leaves the stage, Plant announces "thank you very much, we've had a great time... you've been fantastic... Seattle, goodnight!" A truly amazing marathon performance. Must hear.
The tape is a combination of two sources. The first, used through the initial verses of Stairway to Heaven, is very clear and well-balanced. The second, used for the remainder of the show, is a bit noisy and overloaded.
Click here for audio samples courtesy of Black Beauty.

The one-two punch of Rock And Roll and Sick Again sets the stage for
what will be an incredible show. They are played with precision and
speed and are very powerful. Over The Hills And Far Away features an
excellent solo and interplay between Page and Bonzo. In My Time Of
Dying yet again shows off how powerful the band are tonight.

No Quarter is very long and includes some very interesting playing from
Jones which becomes erratic in a good way towards the end. The whole
band connect with one another with Bonzo providing the perfect link
between Jones's great playing and Jimmy's commanding solos. Plant
surprises the band with a rare 1975 Since I've Been Loving You. The
band play hesitantly in parts of the song, put Page delivers a very nice
solo. Overall a very good performance.
Page again delivers in a pulse-pounding Trampled Underfoot. He owns the
middle section of the song. A very long and very good Moby Dick follows
which draws a large cheer from the audience. The biggest success of the
night comes in the form of a very special Dazed And Confused. Every
single section of the song seems to be spot on. After an excellent solo
"Lethal Weapon" feeling solo the band takes off on a heavy jam before
Plant surprises once again by singing some extremely evocative lyrics
from For What Its Worth over the Woodstock section. Somehow the timing
of the lyrics work out perfectly with the music. After returning to
form and singing a bit of Woodstock Plant improvises lyrics to I Shot
The Sheriff over the reggae-ish tunes Page has found himself forming.
After many improvisations which include Jones and Bonham providing some
excellent backdrops to allow Page to solo uncontrollably but perfect.
The outro section is extended and culminates in a bang. Unbelievably
fast, intricate, surprising & brutal. Perhaps the best of 1975 one of
the best of all time.
A very good Stairway To Heaven has some very interesting parts to its
solo. The band returns to the stage and begins its usual Whole Lotta
Love which is the longest & perhaps the best version of 1975. A heavy
ending segues into a fast and very loud Black Dog. If all this is not
enough, the group returns to play a quick Communication Breakdown that
leads directly into Heartbreaker.
The performance of this concert is absolutely amazing and spot on.
Everyone is in top form. As usual Bonzo and Jones providing great
Rhythm throughout. They both play some very interesting riffs and
connect extremely well. Plant's voice is in excellent form. He hits
several notes that he hasn't been able to hit in most of the concerts of
1975. He is also in a very good mood talking & joking with the audience
for extended periods of time. Page is also on fire throughout the
entire show. His playing is loose, intricate, imaginative w/ barely any
mistakes. His guitar is very alive in between songs & even plays a few
bars from Louie Louie at one point. On top of the excellent playing the
band plays a rare Since I've Been Loving You, a recognizable and classic
Dazed And Confused, plus an extended set of encores. Once again they
prove how much they enjoy Seattle. A magical performance & one of the
greatest shows of all time. Performance: 10/10
More soundboards are available for the available concerts of 1975 than
any other year. Unfortunately this one is an audience only release.
Still, though, for an audience release it is a very good sounding one.
The tape consists primarily of two sources. It is a very good recording perfectly capturing
every instrument but can be a bit bass heavy in parts. It is very clear
and creates a nice atmosphere of being there. The second source is
worse but very listenable to but somewhat noisy. Audio: 8/10

The combination of a great concert, that many consider the best of 1975,
plus a really good audience recording easily makes this a must own. Get
it now! Overall: 9.5/10

Currently, the version of this show that I recommend is Cuztard Pi's "Seattle Center Coliseum" matrix. Though the soundboard and audience recordings occasionally go SLIGHTLY out of sync (not enough to be unlistenable, but just enough to be noticeable), it really allows the music to breathe. Jimmy's guitar is more prominent in the mix and his tone has been fattened up considerably. The one criticism I have of the sound of the 75 soundboards is that his guitar tone is too thin. In addition, the atmosphere and clarity have been preserved incredibly well. I'd wager it's the 2nd best matrix I've heard after "Four Blocks in the Snow".

With this release, I'd say that this is now the go-to 1975 show. In other words, if you can only hear one show from 1975, make it this one. There is no better combination of sound quality and performance from this year! :)

Probably the best show of the tour.There are other shows where individual songs were performed better , but here the band is consistently brilliant. Consistency was lacking for most of the 1975 US tour given Pages broken finger and plants flu. For once Plants voice does not crack on rock and roll. Probably Robert Plants best vocal performance of 1975 . Stairway has a long and amazing solo. Dazed and confused is extended to more than 35 minutes but still manages to be interesting .
Must hear show especially after the soundboard release